What a beautiful day! It was warm enough to work outside and decorate for the wintery season that will soon arrive, as well as enjoy some of the lasting flowers in the garden. This time of year in Minnesota and Wisconsin we go from warm and balmy to shoveling a foot of snow overnight. Northerners get to have a summer bouquet grace the table, and evergreen bough urns stand guard on the deck all while pumpkins and falling leaves still linger. For a few brief moments, the seasons nearly juxtapose. Of course, it is all we can talk about, too! 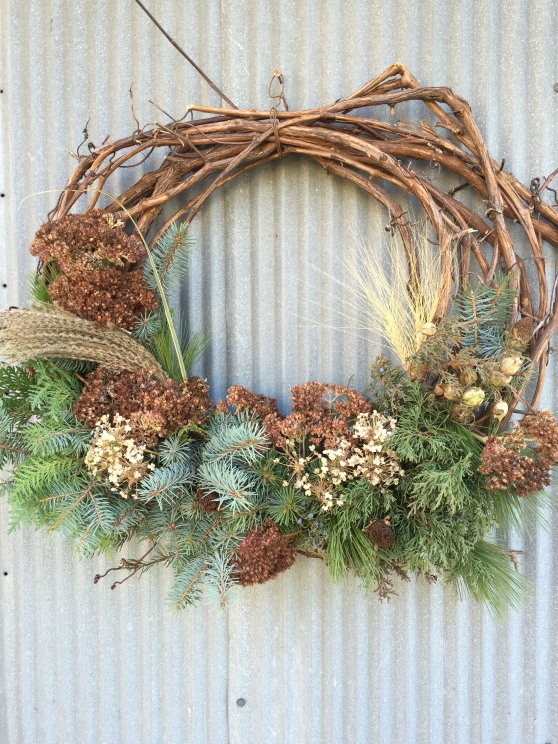 Not only are many flowers still in lazy bloom, but my lazy girl garden is still laughing at me in hysteria! All summer long, I strolled the gardens with nary a weed pluck here and a little scatter mulch there. I ambled around picking a few of this and that for whatever I desired to cook, and hosted a few “garden walks” toting wine and garden appetizers. The summer was languid and luxurious, but as soon as September rolled around it was as if Medusa were out to get me. The joke’s on me! My days touring guests through the bountiful Victory Garden or imagining I was the host of some fabulous “Farm to Table” venue came to an abrupt stop as piles of tomatillos dropped to the ground begging to be gathered, pole beans began popping out of their shells as they dried and I couldn’t find enough people excited about ground cherries, beets, or cayenne peppers to relieve the pressure. The crazy bounty really began to mess with my OCD!

Cold weather looming demands the harvest brought in and the junk cleaned up. But, there just wasn’t enough time each weekend, and the “To Do” list kept getting longer. Furiously, I picked and put – into jars, pots, freezer bags, and neighbor’s porches! I even brought veg to the classroom to send home with students. They easily removed from my life over two hundred pounds of tomatoes, at least a bushel of ground cherries, not enough tomatillos and hot peppers to spice the lives of twenty-nine families! Thanks be!

The garden foliage removal has been the most beastly. You’d think yanking out old plants would be easy, but for some reason they grab and hold the earth not wanting to give up their reproductive tasks – go figure! To clean up ten tomatillo plants easily takes three hours and a strong back ache to follow.  Load after load of garden debris added to the compost pile with no machinery to turn it really makes you wonder what in the heck you’re doing. This is clearly how NOT to build a compost pile! To think part of my Peace Corps expertise was compost building! The country will always win! Mother Nature leaves you city folks alone much of the time, but out here, she holds a powerful wrath!

Obviously, I am smuggly blogging today feeling quite certain that my duties to the garden Medusa have been satisfied. Back to lazy girl gardening!