What a lovely little blushing princess is this! She’s called the Chestnut Crab, about the size of  a golf ball, just sweet and tart enough for a demure little nibble, with a finish reminiscent of childhood in the tree. The Chestnut is flying off the shelves of your local co-op because folks like Dan Walsh know their pleasures.

You may have met Dan and his family if you visited the Kingfield Farmer’s Market. The Walsh family spends their summer tending heirloom tomatoes, the early spring tapping maple trees and for a few Sundays in the summer, Kingfield can enjoy the fruits of their labor. Dan’s wife, Kathleen is a co-worker of mine – a fellow teacher extraordinaire!

Well, a few weeks back, Dan informed me that the Chestnuts had arrived and I had better hurry if I wanted to indulge. Chestnuts you say…what exactly is the chestnut? He explained simply that they are one of the only edible crab apples and are quite delicious little delicacies. Well, of course, being the (clear throat here) foodie that I am, I suddenly had an urgent need to acquire some Chestnut Crabs, so off to the co-op I went.

Lo and behold, Dan was right. There, amidst the apples was a small section with a tag labeled, “Chestnut Crabs,” but there were no tiny lovelies to be had, boo hoo. I immediately inquired as to their whereabouts and was quickly reassured that they were just coming out of the cooler! Whew. Once the box of little crabbies was wheeled to the produce section, I had my pick. I packaged my two pounds and off I went to make a pie…

Apple pie turned to apple crisp! It’s Wednesday after all, I have the math tests yet to correct this evening, report cards are waiting in the wings, and a mock-up of this week’s art lesson is pounding on the door – not to mention that I better get started thinking about next week, or I’ll be planning lessons all weekend.

Yes, I am busy, but not without a little creative energy. Tonight’s apple crisp has a few surprises. First and foremost it is sweetened entirely with the Walsh family maple syrup from the spring of 2009. The demure little Chestnut Crabs also share their quarters with a large diced beet, some blueberries from last summer, a little amaretto glaze and chopped almonds to top it off. Not your average crisp. This one is hearty and not too sweet.

Coring the Chestnuts is a pain. I tried the old-fashioned method of quartering and cutting out the seeds, and figured that would have taken me until tomorrow. Next I tried the apple cutter, but the skins are too tough to break through. So, I ended up cutting the bottoms off the little apples and that way they went right through the apple slicer. Check it out.

Once you get all the fruit sliced, dump it into a 9 by 13 pan. Sprinkle it with the amaretto and pour the maple syrup over the top.

Mix the crisp topping ingredients in a bowl. The oil and syrup should make the topping stick together slightly. Spread this out over the fruit and bake for 1 hour at 375 degrees. I found out that Chestnut Crabs remain pretty crunchy after baking and so this dish turns out to be pretty hearty – perhaps a good breakfast meal. Enjoy. 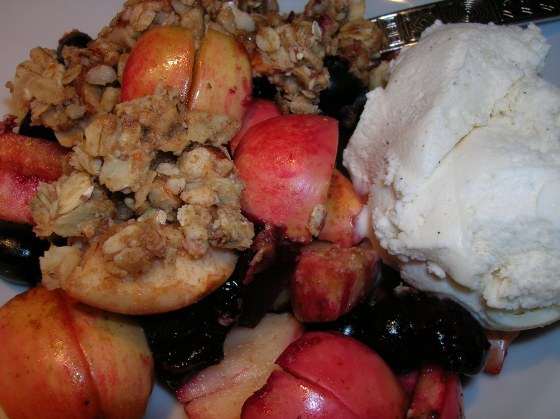